The following text is to be found in a frame in the church:

Woodkirk means wooden church, originally a cell of Black Canons under Nostel Priory, it was formed in the reign of Henry I (1100-1135). Although only a cell to the Priory, it was of considerable extent, as was proved by the foundations of it extending over the gardens and Parsonage premises. In the valley beyond the east of the church the Canons had their fish ponds. The Church had an excellent water supply which was obtained from a well some 1.5-2 miles away, and piped in leaden pipes to the church, the pipes being laid in the 15th century. 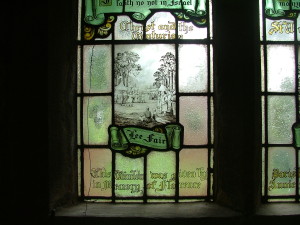 Lee Fair, as depicted in a church window

A fair was held at Woodkirk, and during the reign of Edward II (1284-1327), it was reckoned amongst the most famous in the country, and to which it is said merchants from France, Spain, and even Germany came to sell their merchandise. During the time of the fair, the Priest and clerk stood ready all day, to marry all such as were desirous to enter the matrimonial state. Miracle plays were performed at the fair, the object to bring religion home in a tangible form to the frequenters. The fair was later to become Lee Fair and lasted for three weeks and three days. At this present day only the first day (Lee Gap) and the last day (Latter Lee) are celebrated. The predominant industry of the area was “stonequarrying” followed by brick manufacturing and some coal mining. 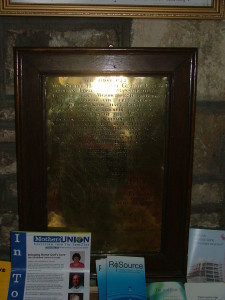 Brass plaque at back of church

This text is found on a brass plaque framed in wood (shown in picture):

The Right Honourable George Earl of Cardigan Lord of the Manor of West Ardsley alias Woodchurch and three parts in four of the freeholders and others who have the right of Common ground therin have inclosed several parcells of the Waste or Common ground within the said Mannor containing by estimation fifty three Acres one rood or thereabouts and now in the several tenures or occupations of John Scott Whittaker Thomas Atack and William Awtice in Order to obtain the Bounty of he late Majesty Queen Anne and also for a provision for the Minister of West Ardsley alias Woodchurch the better to encourage him to perform, Divine Offices in the said Church twice every Sunday viz to read prayers and preach forenoon and after 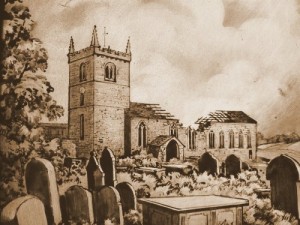 In 1832, a great storm blew the roof in to the church and the walls and roof had to be rebuilt, as can be seen in this picture from one of the church windows.

The ceiling and floor were replaced in 2007.

The pipe organ was replaced with a Viscount digital organ in April 2010.

St Mary’s contains the local war memorial, remembering those who dies in the first and second world wars. Wakefield Family History have a detailed page about the men on the memorial. It can be found here.